The request for approval (RFA) is the very first step in successfully completing a senior design project. Before submitting your RFA, you must post your project idea to the Web Board using the "Idea" post type. Once your idea has been fleshed out through the Web Board, you can move on request for approval through PACE under the My Project page. Once submitted, your project will be cloned to the Web Board as "Project Request" post. You can edit the project on the My Project page, add your teammates and see comments from the instructors. The course staff may provide feedback on your idea (which will appear at the bottom of your project's page), or suggest changes in the scope of the project and ask you to re-submit an RFA. Based on your incorporation of feedback your project will be approved or rejected. If it is rejected, the My Project page will revert back to it's original format and your project will disappear.

Once the course staff has approved the project idea, you will receive instructions on how to submit your project through PACE, at which time you will be assigned a project number in the Projects list, a TA, and a locker in the lab. Once your project is approved, please go to the Projects page, log into the PACE system, and make sure all of the information is correct.

Projects must be legal and ethical. They must have significant scope and complexity commensurate with the size of the team. This is, of course, a subjective assessment of the course staff. To gain some insight into this judgment, please browse projects from previous semesters. The project must involve the design of a significant hardware component at the circuit level. In exceptional cases, projects not meeting this criteria may be acceptable when augmented by a Special Circuit assignment (however this is typically a last resort).

Beyond these basic requirements, you have total discretion in proposing a project. This is a great opportunity for you to pursue your own interests. Since you choose your own projects, we expect a high level of enthusiasm from you and your team.

The RFA submission deadline may be found on the Course Calendar. Typically, approval of the RFA is due during the afternoon of the third Thursday of the semester.

Posting: Choosing a project: Choosing partners: Some general project ideas that are fraught with pitfalls: 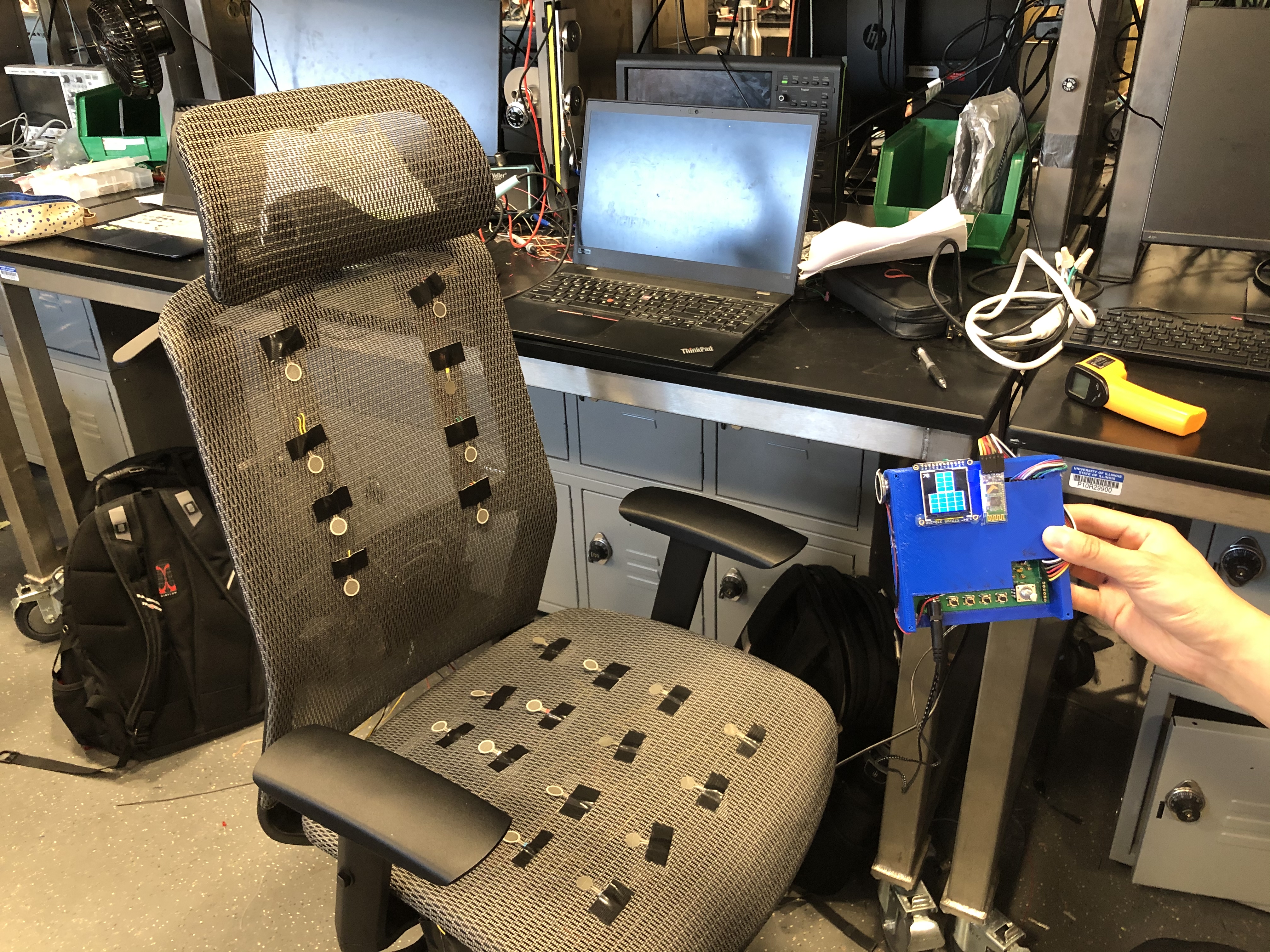 The majority of the population sits for most of the day, whether it’s students doing homework or

employees working at a desk. In particular, during the Covid era where many people are either

working at home or quarantining for long periods of time, they tend to work out less and sit

longer, making it more likely for people to result in obesity, hemorrhoids, and even heart

diseases. In addition, sitting too long is detrimental to one’s bottom and urinary tract, and can

and muscle pain, and other health-related issues.

mentioned above by reminding people if they have been sitting for too long, using a fan to cool

off the chair, and making people aware of their unhealthy leaning posture.

1. It uses thin film pressure sensors under the chair’s seat to detect the presence of a user,

and pressure sensors on the chair’s back to detect the leaning posture of the user.

2. It uses a temperature sensor under the chair’s seat, and if the seat’s temperature goes

beyond a set temperature threshold, a fan below will be turned on by the microcontroller.

3. It utilizes an LCD display with programmable user interface. The user is able to input the

duration of time the chair will alert the user.

4. It uses a voice module to remind the user if he or she has been sitting for too long. The

sitting time is inputted by the user and tracked by the microcontroller.

5. Utilize only a voice chip instead of the existing speech module to construct our own

6. The "smart" chair is able to analyze the situation that the chair surface temperature

exceeds a certain temperature within 24 hours and warns the user about it.

sensor. This subsystem provides all the input signals (pressure exerted on the bottom and the

back of the chair, as well as the chair’s temperature) that go into the microcontroller. We will be

serves as the master, and the second one controls the outputs and acts as the slave. We will

the board and placed into it to avoid over cluttering the PCB with extra circuits.

sensors: pressure and temperature. Once it determines that there is a person sitting on it we

can use the internal clock to begin tracking how long they have been sitting. The clock will also

be used to determine if the person has stood up for a break. The microcontroller will also use

on the fans if necessary. A speaker will tell the user to get up and stretch for a while when they

have been sitting for too long. We will use the speech module to create speech through the

speaker to inform the user of their lengthy sitting duration.

user. When it’s detected that the user is leaning against the chair improperly for too long from

the thin film pressure sensors on the chair back, we will flash the corresponding LEDs to notify

the user of their unhealthy sitting posture.

The implementation subsystem can be further broken down into three modules: the fan module,

the speech module, and the LCD module. This subsystem includes all the outputs controlled by

The power subsystem converts 120V AC voltage to a lower DC voltage. Since most of the input

and output sensors, as well as the ATMEGA88A-PU microcontroller operate under a DC voltage

of around or less than 5V, we will be implementing the power subsystem that can switch

between a battery and normal power from the wall.

human sitting on the chair

below the threshold, the fan is able to be turned off by the microcontroller

-The outputs of the implementation subsystem including the speech, fan, and LCD modules are

able to function as described above and inform the user correctly

Our final demo of the healthy chair project is an office chair with grids. The office chair’s back

holds several other pressure sensors to detect the person’s leaning posture. The pressure and

temperature sensors are located under the office chair. After receiving input time from the user,

the speech module. The fan below the chair’s seat is able to turn on after the chair seat’s

temperature goes beyond a set threshold temperature. The LCD displays which sensors are

activated and it also receives the user’s time input.